The island Saba is the smallest inhabited island of the former Netherlands Antilles, and currently a special municipality of the Netherlands. Saba is located approximately 30 kilometres to the south-west of Sint Maarten. The island has a land area of 13 square kilometres. Saba consists of a dormant volcano with four lava domes. The steep slopes run to sea and the coast is rocky. The Mount Scenery volcano is 877 meters high, which is the highest point on the island and of the whole Dutch Kingdom. Saba has approximately 1400 residents, the majority of which live in the capital The Bottom.

Columbus sighted Saba in 1493; the island was inhabited by the Caribs and Arawaks at that time. Columbus named the island San Cristóbal. A possible explanation for the name Saba is that it was abbreviated as S.†bal and over time this was read as Saba. In 1632 the island was colonized by the Dutch. In 1635 an English ship run aground near Saba; the survivors were probably the first European residents. The current population also has African, Scottish, Irish and Dutch ancestors. It is notable that a quarter of the inhabitants has Johnson or Hassel as their family name. Saba has been colonized various times. It was owned by France, Spain, the Netherlands and the United Kingdom. In 1816 it finally became Dutch. In 1960, a small airport was made on the northern most point of Saba (Flat-Point). It has the shortest runway for commercial air traffic in the world (400 meters).

The tourism industry now contributes more to the island’s economy than any other sector. There are about 25,000 visitors each year. Saba has a number of inns, hotels, rental cottages and restaurants. Saba is known as the “Unspoiled Queen” of the Caribbean. Saba is especially known for its ecotourism, having exceptional scuba diving, climbing and hiking.  In 1988 a medical faculty was set up on Saba – the Saba University School of Medicine – which attracts a lot of students from the United States.

The flag of Saba

The flag of Saba is a composition of the colours red, white, blue and gold (yellow). The upper half consists of two identical red triangles, the bottom half consists of two identical blue triangles. The diamond in the middle is white and has a gold star with five points. This colour was chosen as a symbol of the island’s wealth and hope for a good future. The star represents the island; the colours red, white and blue symbolize the ties it has with the Netherlands. Furthermore, red symbolizes courage, union, and decisiveness; white symbolizes peace, and blue symbolizes the sea. 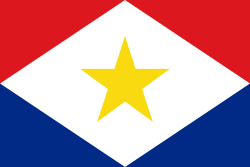