The island of St. Eustatius is 21 km² and has a population of approximately 3,800 people. The capital is Oranjestad and since 2010 it is a special municipality of the Netherlands. Sint Eustatius consists of a (likely) dormant volcano in the south east of the island, which is called The Quill (an English version of the original Dutch name ‘De Kuil’, which means the Pit) and a 200,000 year old volcanic area in the north of the island, with a relatively flat area in between.

Columbus sighted Sint Eustatius in 1493. In 1636 the Dutch took hold of the island. St. Eustatius became an important transport harbour; the most profitable possession of the Dutch West India Company [West Indische Compagnie; “WIC”]. In the 18th century it was also called the Golden Rock. In 1779 more than 3000 ships from Europe, America, and Africa entered the harbour of Oranjestad. As many as 20 ships a day would arrive. The harbour could hold 200 ships at the same time. In 1776 England took possession of St. Eustatius, followed by a French and English occupation. The economy of the island collapsed completely. In 1816 St. Eustatius fell into Dutch hands again, but the people on the island continued to speak English.

The government is the largest employer on St Eustatius. The largest private employer is Statia Terminals, an oil terminal of the American company NuStar. Tourism, and in particular diving tourism, is important to the island.

The flag of St. Eustatius

The flag is divided into four five-sided blue fields each edged in red. In the middle it has a white diamond containing the outlines of the island in green and a yellow star. 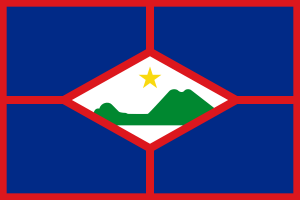