Home > About us > Working area > Bonaire

The island of Bonaire is located at approximately 50 kilometres from Curaçao, 80 kilometres to the north of Venezuela and 138 kilometres to the east of Aruba. Bonaire is approximately 38 kilometres long and between 5 to 11 kilometres wide. Bonaire has approximately 15,000 residents. Most people live in the largest town, Kralendijk. The first inhabitants of Bonaire were Caquetios, a tribe of Arawak Indians from Venezuela. They arrived in Bonaire around 1300 BC. In 1499 the island was conquered by the Spaniards and in 1636, the Dutch took control of Bonaire. At the end of the 17th Century, African people made into slaves were taken to Bonaire to work. The current inhabitants are a mix of more than 80 nationalities and ethnic backgrounds. Bonaire has a small, but thriving economy. Most people on the island work in tourism. However, the salt industry and the oil transhipment harbour also generate employment. Bonaire is known as a Divers’ Paradise. The combination of quiet waters, good view on water and exquisite coral reefs and fish have made Bonaire the place to be for divers!

Rincon is not only the oldest village on Bonaire, but also the oldest of the former Netherlands Antilles and Aruba. The Spaniards built their settlement here in the early 16th century. Rincon was strategically built in the valley with a view on the enemy ships, such as pirate ships. Slaves were brought to Bonaire to work on the plantations or in the salt mines in the south. The slaves and their families lived in Rincon. They could walk to the salt mines and stayed there the whole working week.

The flag of Bonaire

The yellow triangle represents the sun and the bright yellow flowers which come up after the rain. The white space in the middle represents the pure heart of the people on Bonaire and the blue triangle reminds people of the Caribbean ocean surrounding their island. The star in the flag of Bonaire has six points, which represent six original living areas. The compass represents the valiant sailors who provided their services to the Dutch navy during the Second World War. And finally, the fiery colour red in the compass represents the courage of the people of Bonaire. (information provided by the Bonaire Bureau of Tourism) 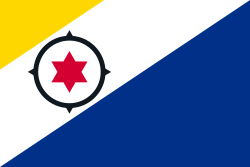